A Tale of Two Cities

I hate to say it, but the Red Sox’s chances at another World Series are gone until next year. Though last night was the proverbial nail in the proverbial coffin, the outcome of this season was iced about 2 months ago when the Sox lost their two best players (Youkilis and Pedroia) to injuries. Those injuries came when the Sox were already missing Jacoby Ellsbury, Mike Cameron, Victor Martinez and, shudder, Jeremy Hermida. For this Red Sox team to finish with 90 wins will be a pretty amazing feat. 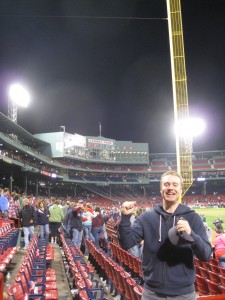 Me and Pesky's Pole at Fenway Park

Last week, thanks to Phil Weinrobe and that unpredictable Jewish calendar, I got some tickets to Fenway Park and took Nick Consol with me. We took the bus up at noon, went straight to the Park, and took it all in. I can only say what has already been said about Fenway. It’s very old (it’ll be 100 years old in 2012). The cement floors have buckled and slope in odd directions. In typical fashion, the Sox completely blew it and lost an easily winnable game. We took the 1am bus back that night and got in to NYC at 5am.

Then last night, I got another opportunity (thanks to Nick) to see the Sox play again, this time against the Yankees in the Bronx. It was my first Sox-Yanks game and I was not afraid to support my team even at Yankee Stadium. In contrast to Fenway, Yankee Stadium is about twice as large. It’s got a 103 x 58 foot television screen (1080p) in centerfield and there are 625 speakers in the seating bowl (with another 675 in the suites and back of house). Between almost every pitch, some pep-inducing song is played out all those speakers (in case Yankee fans are bored by the game I guess). Oh, it’s also absurdly expensive. But because of the rain forecast, tickets were cheap on stubhub ($20). Sadly, again, the Sox lost, but it was the most exciting game I’ve seen in person with both closers blowing their respective saves. 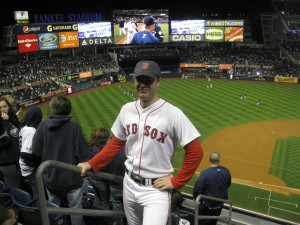 Being ridic at Yankee Stadium

The Sox tied it in the 9th off of Mariano Rivera on a base hit by #22 Bill Hall. Well, I don’t claim to have anything to do with that, but I should mention that I was wearing Bill Hall’s jersey (and pants and socks, er, sox). While this may seem like a crazy thing to wear to Yankee Stadium, I was really disappointed by the Yankees fans…not a single beer thrown at me (maybe because a beer is $11). I mean, come on Yankee fans! You people make me sick. 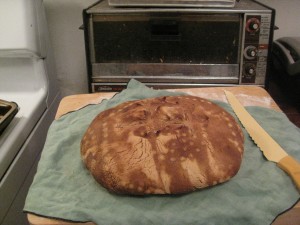 Also check out this bread I baked. I’ve been baking bread for awhile, but now I am using a starter (like a sourdough) based off of a recipe in William Alexander’s book 52 Loaves. The best part is that it only takes about 9 hours to make.

This entry was posted in Nonsense and tagged baseball, bread. Bookmark the permalink.

2 Responses to A Tale of Two Cities